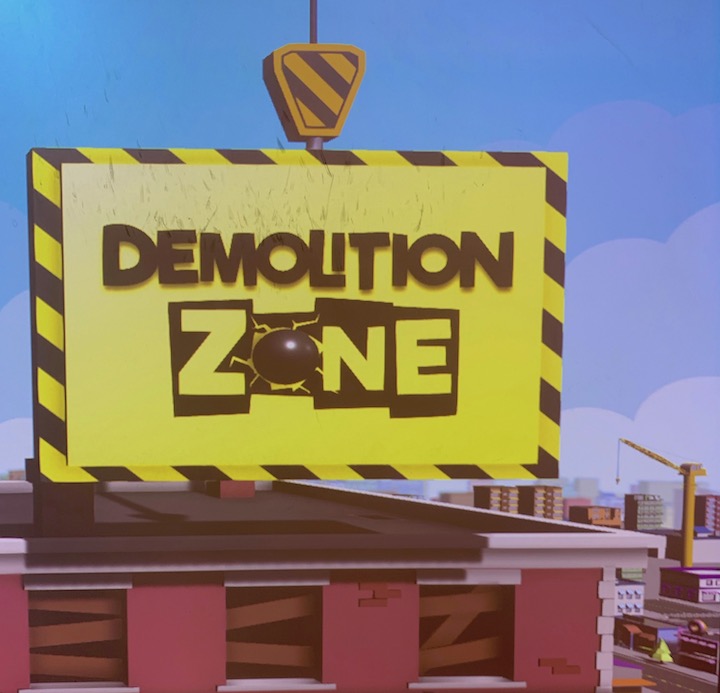 The game is called Demolition Zone. Inside of Two Bit Circus, the "micro-amusement park" on Mateo Street between East Sixth and Seventh Streets in downtown Los Angeles, a duo of players steps over black-and-yellow caution markings, past posts referencing the lattice towers of construction cranes, and up onto platforms inside of an open, toolshed-sized box. Between them a wood and plastic barrier is painted to look like broken concrete with rebar poking out. The players begin to propel the padded balls that hang at approximately waist- or chest-level (height depending) toward a screen. The objective: to perform the action as forcefully and as quickly as possible in order to "wreck" the multi-story derelict building to which each player has been assigned. 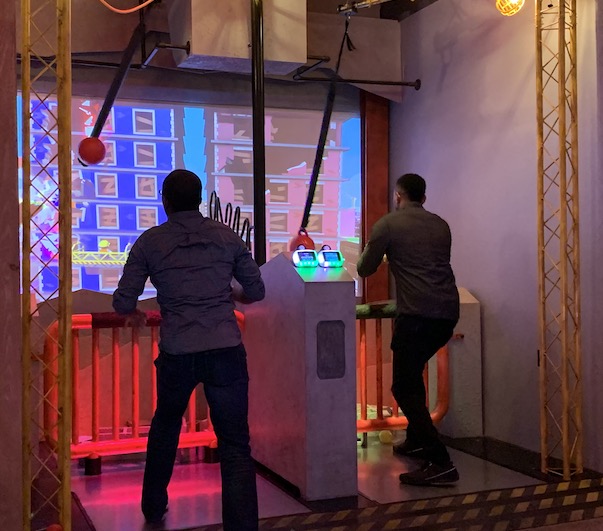 The brick and concrete structures on-screen—blue for player one, red for player two—have the style of late nineteenth century New York tenements but the height of skyscrapers. All the windows are boarded up. As the animation pans steadily downward from top floor to bottom, points are awarded for each strike against the buildings' frames. Impact produces a dramatic cloud of digital dust, the sound of falling and piling rubble, and the shaking of the stainless steel underneath each player's feet. With the casualness of passing a basketball, one turns architecture into absence as portions of the the buildings dematerialize. The winner is the one who causes the most damage. Extra points are earned either by targeting the floating gold boxes indicating "fixer-upper" units or the road-flare flaming red barrels signifying explosives, maximizing damage. Points are lost by hitting birds or the hard-hatted workers who suddenly pop up on scaffolding.

What kind of repair or rehabilitation are these workers doing at the same time the building is being demolished? What would be left to "fix up" if the empty, dynamited high-rise disappears? No matter—the players continue on, single-mindedly clearing the way so that a sliver of the sixty percent of global assets that are invested in real estate have something else to do.1 They are the capital R's in "Renewal," the personification of the "powers that be."

Surrounding them are other twenty-somethings: sipping seasonal cocktails prepared by a robot bartender, shooting lasers at zombies, or flying over Jurassic landscapes as pterodactyls. While fantasy and role-playing predominate throughout the one-story, 44,000-square-foot warehouse, Demolition Zone remains unembellished. Players see a skyline of more contemporary-seeming buildings juxtaposed with the game's now crumbling edifices, while cranes soar in the background at the edges of the screen. As they walk outside of Two Bit Circus and into the Arts District, the wrecking crew will encounter the beginnings of the same thing.

The endlessly hyped Arts District—officially bounded by Alameda Street and the river to the east and west, and First and Violet Streets to the north and south—has entered fully into an era of demolition. While the area had been known since the mid-1970s as a dense contemporary cultural hub within a turn-of-the-twentieth-century built environment, farewell events heralding the demolition2 of the landmark Sixth Street Viaduct in February 2016 marked the beginning of a large-scale pivot away from the neighborhood's previous period (and versions) of adaptive reuse.3 Until the addition of the architect Michael Maltzan's One Santa Fe boutique housing complex in 2014, in fact, the post-heavy industrial, still light industrial topography stayed more or less similar to the one visible in the car chase scene of 1985's To Live and Die in L.A.,4 even as prices and uses dramatically changed.

Between the celebrity sightings that followed the 2006 opening of the Biscuit Company Lofts (just south of Two Bit Circus) and the ribbon cutting for One Santa Fe eight years later, real estate industry-adjacent media (Curbed L.A., Downtown News, and the Los Angeles Times) joined city officials, restauranteurs, landlords, and more landlords in doubling down on promotion and "business improvement," advertising and sanitizing the 8.6-square-mile zone at every turn. The community of artists described in a 2007 obituary for the Traction Avenue "pioneer" Joel Bloom was hard to find by the mid-2010s, when it was already clear Los Angeles was heading for an Arts District devoid of artists.5 Any lingering visual or performing arts-related activity has been utilized for publicity.

Since 2017, developers have been announcing plans for the demolition of several of the Arts District's remaining warehouse spaces to pave the way for starchitect projects such as 6AM (at East Sixth and Alameda Streets), by the Swiss firm Herzog & de Meuron, and 670 Mesquit (named for its address), by the Copenhagen and New York-based Bjarke Ingels Group. Each new initiative will bulldoze portions of the current landscape. Notwithstanding the supposed uniqueness of the desired design products to be delivered by these global corporations (or the amount of expensive housing units to be added6), the thought of incorporating existing structures into any scheme was never considered at all. This is unsurprising, as the working class industrial facilities from the 1980s are of no use to the neighborhood's brand in 2019. One block north of Two Bit Circus, a thirty-five-story tower scheduled for 520 Mateo Street (dubbed 520 Mateo) is already supplanting what was, at least the last time the Google Maps car passed, a still-functioning 1985 workplace next to the Fourth Street Bridge. 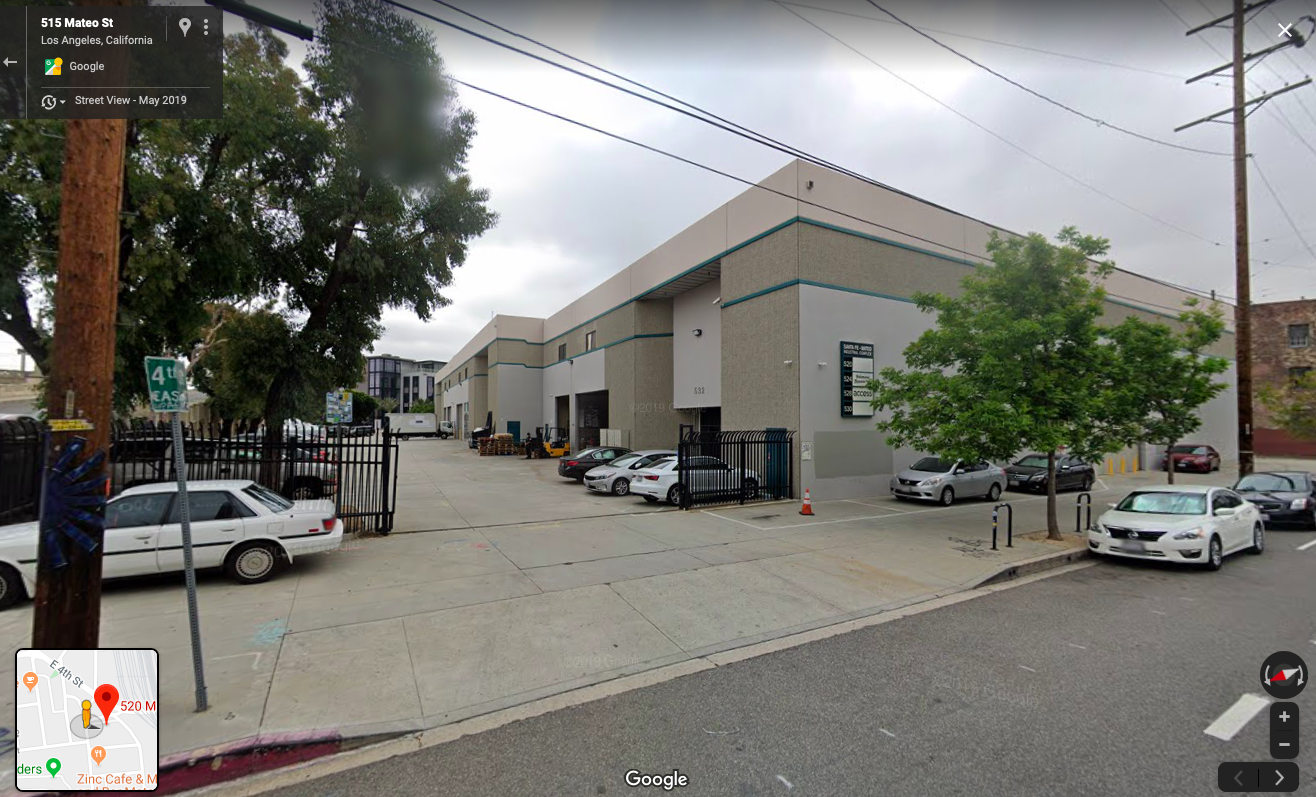 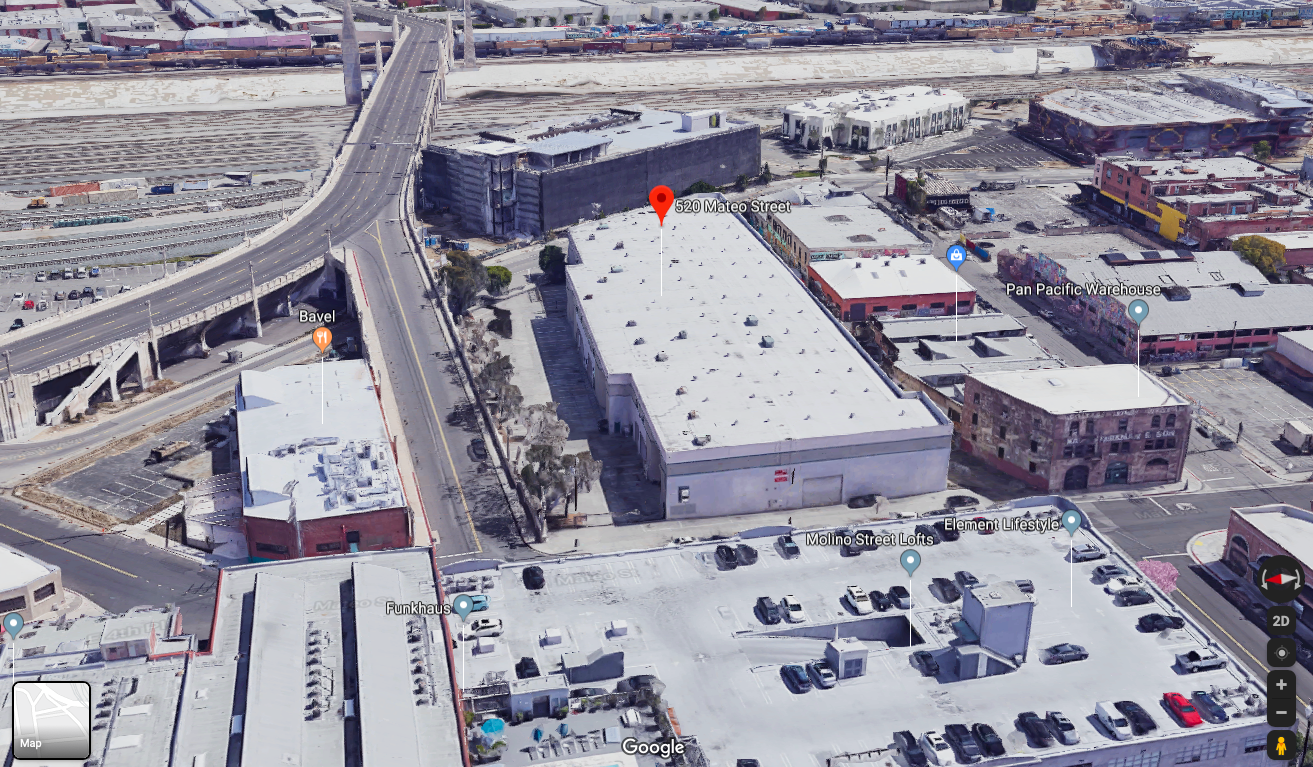 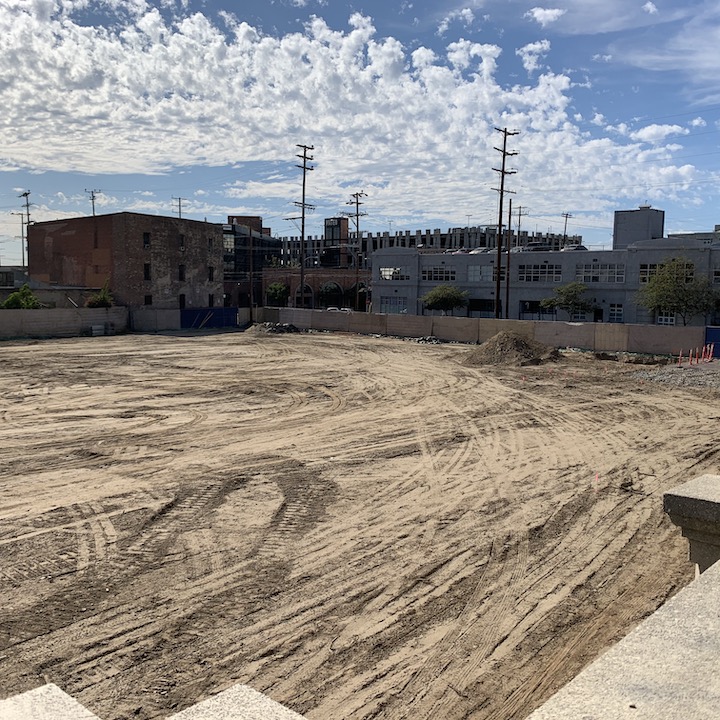 While the Arts District may not look like Manhattan's Hudson Yards any time soon, these three demolitions will guarantee many more. They are the early iterations of a long-forming scenario. The architect Charles Jencks declared in 1977 that "modern architecture died in St. Louis, Missouri on July 15, 1972, at 3:32PM (or thereabouts),"7 in reference to the widely viewed demolition of that city's Pruitt–Igoe housing project, and the polemic is commonly referenced as a swipe at the modernist panacea. The scope of Jencks's "thereabouts"—how long before 3:32PM this particular fatality was set in motion—is rarely noted in frequent citation, even though one can trace trends and decisions and attitudes in St. Louis over several decades that lead to that supposed death time.

The geographer Doreen Massey described how "places are not 'given'—they are always in open-ended process. They are ... 'events.'"8 The event of a demolition is a node in a sequence that long precedes and proceeds the wrecking ball, in no small part due to the internal contradictions a place fosters around "what its past has been (the nature of its 'heritage'), conflict over what should be its present development, conflict over what could be its future."9

In general, demolition is usually a sign of new construction. The costs involved are put forth as part of someone's intended return on investment.10 Bunker Hill was pushed aside in anticipation of Brasilia-like future development11; the Richfield Tower came down for ARCO Plaza; Pico-Aliso was wiped away by HOPE VI; Irving Gill's Dodge House became the Courtyards on Kings Road; the Garden of Allah Hotel gave way to Lytton Savings, which is now about to give way to another Frank Gehry project. No one is unveiling any new plans until the attention paid to an area—via gentrifiers nowadays, urban renewalists in the past—is so great that ROI is guaranteed. Money follows money, and plenty has been thrown around in the Arts District in the last five years.

Thus, the urge and recent precedent for building higher and higher in the neighborhood (two high-rises at fifty-eight stories each in the case of 6AM) will feed into the general DTLA YIMBY12 mentality that demands all land parcels live up to their "highest and best use," or rather their highest profitability and best use as magnets for more development. In preparation for all these new skyscrapers, the next five years in the Arts District may look like a low-rise version of the 1980s arcade game Rampage, but with finance capital as the monster rather than King Kong. 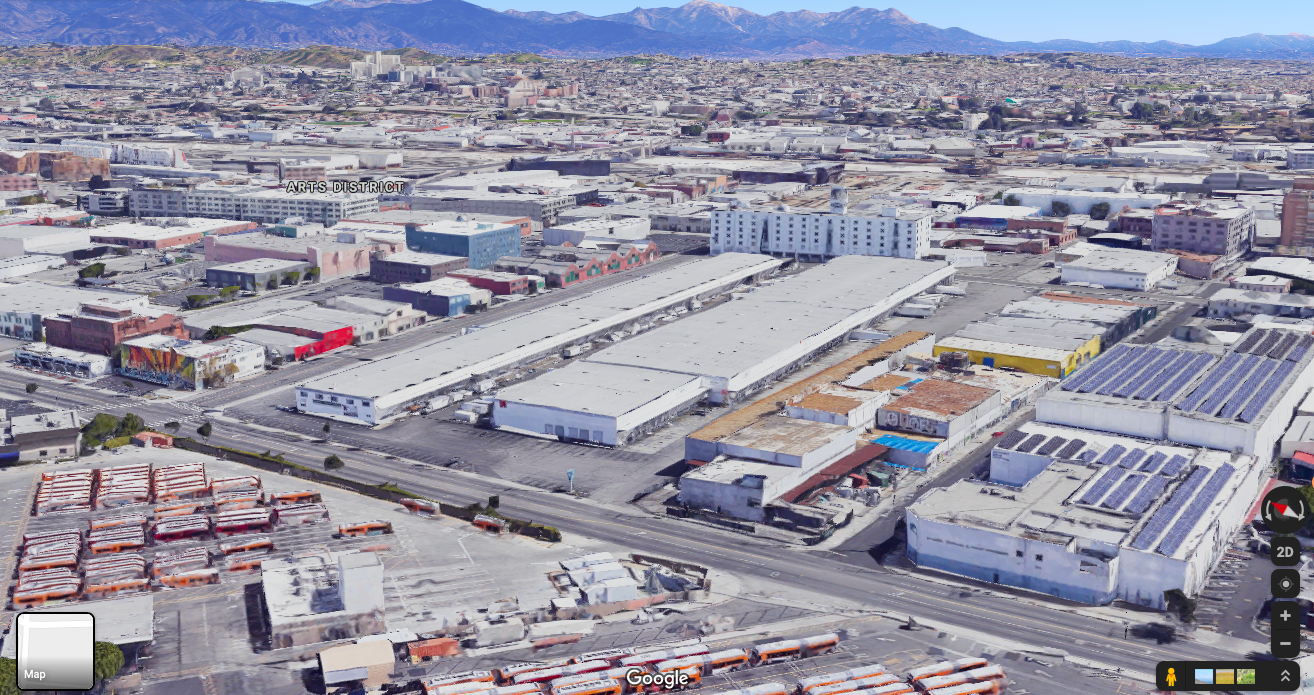 Google Maps 3D, Southwest corner of Sixth and Alameda Streets, site of 6AM. Screenshot from November 2019. 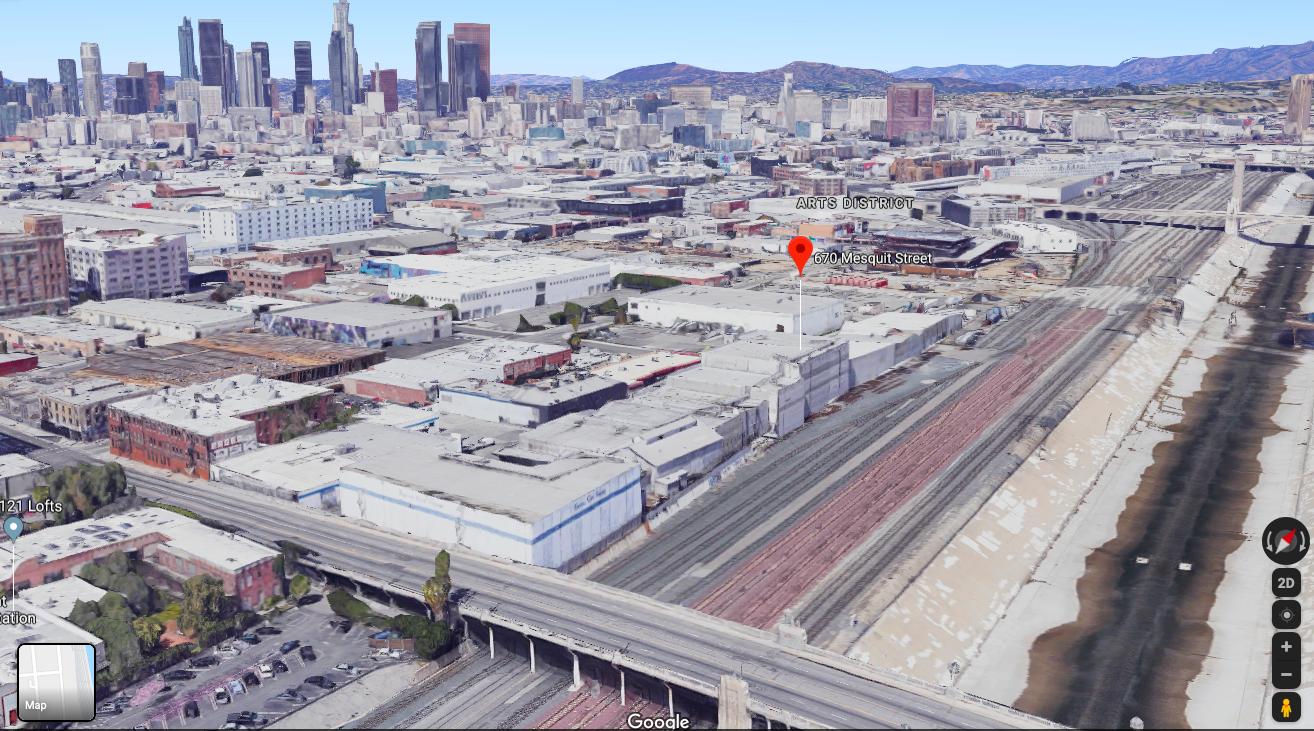 So what? Who will miss a bunch of sprawling distributions centers? No big deal. The jobs can just move to the cities of Vernon or Commerce.13 These are the kinds of buildings usually described as "nondescript" or "unassuming," not the distinctive brick charmers from the 1900s that define the Arts District. Those will certainly be landmarked and protected no matter how popular the neighborhood becomes. 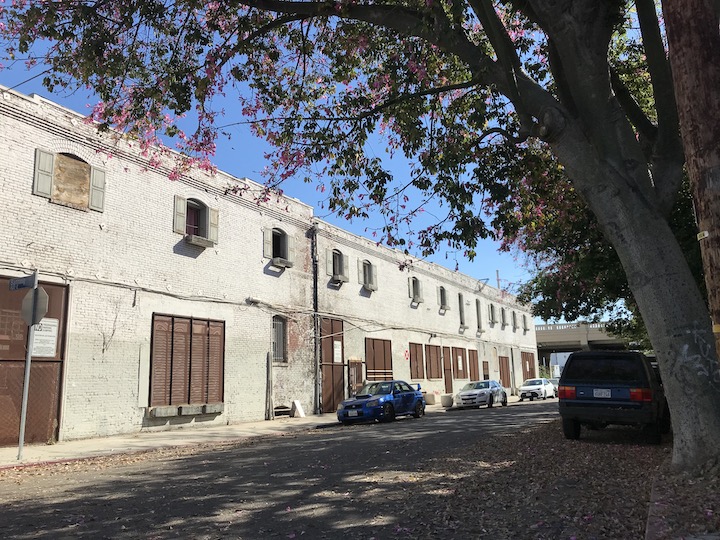 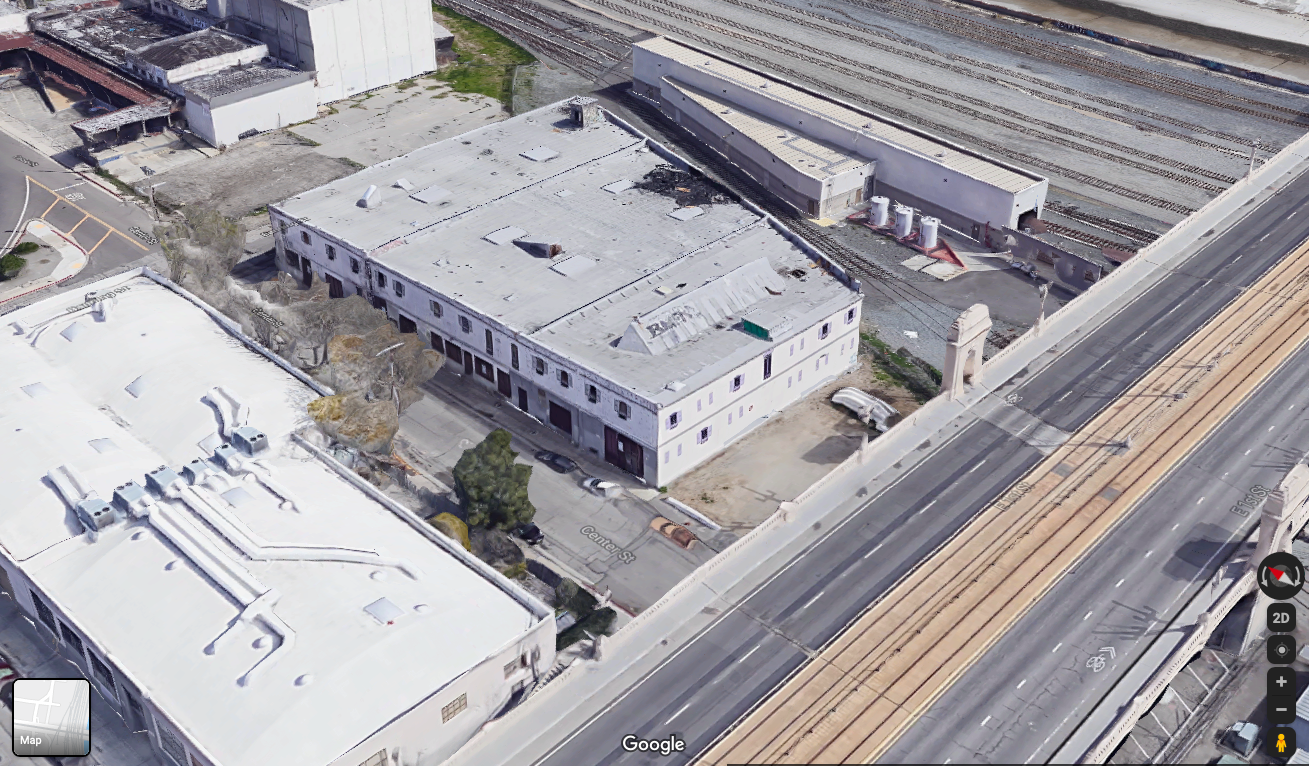 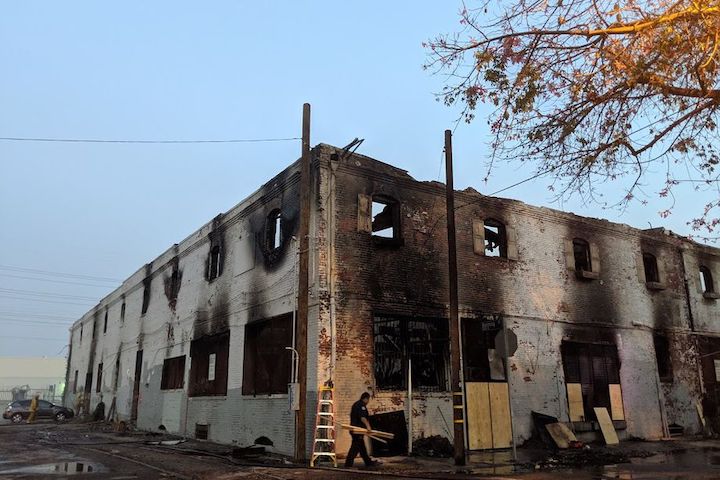 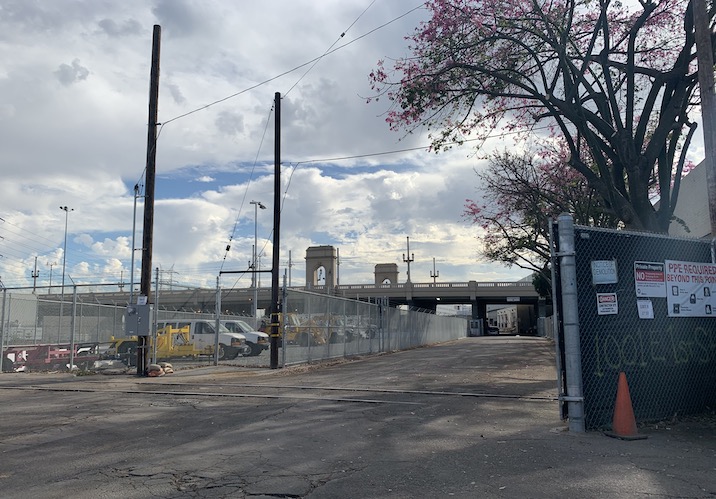 The James K. Hill and Sons Pickle Works Building (constructed between 1888 and 1909) at 1001 East First Street, one of the last Victorian industrial buildings in downtown Los Angeles,14 sat empty, abandoned, and unprotected until a fire last year ruined any chances of preservation. Known as the Citizens Warehouse, it was one of a handful of homes for the nascent Arts District in the early 1980s, serving as studios, loft spaces, and "the world's first drive-by art gallery,"15 called the Art Dock (1981–86), showing installations that addressed or embraced the uncertain nature of the artists' situation, such as Karen Kristin's Wolf at the Door (1982).16 Art Dock proprietor Carlton Davis and fellow residents had lived and worked precariously as the threat of eviction by the city for illegal occupation morphed into the threat of eventual displacement after being city-endorsed, thanks to the 1981 Artist in Residence ordinance.17 18

The city would go on to purchase the location in 2005. Once the last artists had vacated in 2008, a large portion was demolished as part of widening the First Street Viaduct.19 20 Because the project used federal funds and the Pickle Works was eligible for the National Register of Historic Places, the Los Angeles Conservancy stepped in to mitigate further damage; that is, until the Metropolitan Transportation Agency (Metro) insisted on its need for the site, just north of One Santa Fe.21

As one of the area's "origin" points (in its conception post-1980), it had all the typical characteristics of a highly visible historic preservation campaign: period-specific architecture that was the last of its kind (in proximity), community defining activity, and, most importantly, the specters of both neglect and demolition by a more powerful, seemingly heartless force.22

There were some meetings to "Save the Pickle Works!," and the Conservancy highlighted it as a cause for concern. But press coverage was minimal and the Los Angeles Times was silent. In the midst of negotiations, the building burned.

While not demolished for a luxury tower, the Pickle Works is nonetheless strong preliminary evidence of a lack of any current overarching standard of "sacred" in the Arts District in terms of buildings and their potential to vanish. If a structure so absolutely core to the neighborhood's foundational myths can disappear with such little sympathy, how can we assume others will not follow suit, and soon? Just look at the American Hotel (sold in 2001 and then again in 2013). It is still "preserved," but entirely gentrified. What happens when the suitcase full of money and sleek renderings by a famous architect show up, when demolition is someone's foregone conclusion? This is Los Angeles after all.23

After the writing of this text, a federal indictment accusing then Los Angeles City Councilmember José Huizar of racketeering listed 520 Mateo Street as one of several development projects connected with various bribery schemes in Council District 14.

The next Preserve text can be read here.